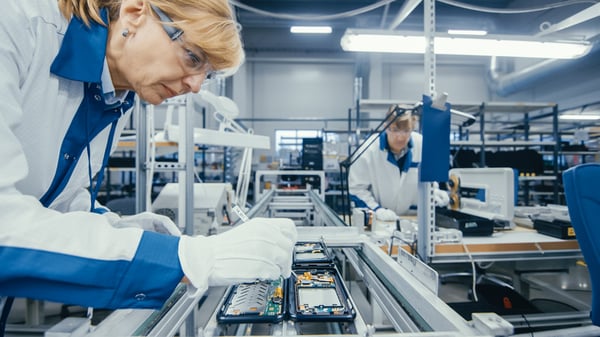 As today’s electronics designs become smaller and more complex, more engineers are relying on surface mount technology. After the 1980s, this technology became the preferred PCB assembly technology in electronics manufacturing and hasn’t let up since.

Most components of the phone in your pocket -- whether it’s an iPhone 11 or a flip phone -- were probably made via surface mount technology (SMT). Many of the components in your car or Uber ride today were likely made via SMT assembly.

So, what is SMT assembly, and why was there a need to create this technology?

What Is SMT Assembly: The Basics

Surface mounting is a way to produce electronic circuits by placing components directly onto the board’s surface.

SMT assembly is an alternative to the through-hole method of PCB manufacturing, which had its heyday in the 1970s and 1980s. As electronics manufacturing continued to gain momentum, a more efficient, better process became necessary. SMT assembly was born out of this need.

SMT assembly has a broad range of uses. It also has a few limitations your design team should consider.

Just like with through-hole, there are both pros and cons involved with SMT. Let's start with some of the advantages of SMT assembly:

One of the reasons SMT assembly was conceived was to reduce manufacturing costs.

SMT requires far fewer holes to be drilled into the circuit board. This lowers the costs of processing and handling significantly.

Another benefit of SMT assembly is that it uses circuit board space in a much more efficient way. Thanks to SMT assembly, engineers can now finagle complex electronics into smaller assemblies.

In addition to more efficiently using the space on a PCB, SMT assembly is much faster, allowing manufacturers to increase total output. To put this in perspective, something that might have taken 1-2 hours to perform via through-hole takes 10-15 minutes via SMT assembly.

In through-hole assembly, lead wires pass through the holes to connect components. Because SMT components are soldered right onto the PCB, the overall makeup is far less complex.

SMT assembly is very reliant on machines, and not so much on us humans. SMT is a process that's less prone to error because it's almost entirely automated.

SMT assembly was born as a way to create a better, more powerful electronic product.

One look around your office or living room will show you several common surface mount technology applications. Basically, turn to surface mount PCB assembly whenever you need a product that’s:

While through-hole is still used in certain applications or even certain locations on a board, SMT assembly has largely taken over.

As is the case with all manufacturing processes, there are some disadvantages to SMT assembly. The biggest is that it requires a much higher attention to detail than through-hole assembly. Even with the process largely automated, your design parameters still have to be met to produce a quality end product. This largely falls on the shoulders of the designer and the electronics contract manufacturer.

Trouble can also arise when SMT is used to place components to a PCB that will function in conditions that will involve:

This problem can be mitigated by blending SMT with through-hole processes to get the benefits of both. That’s right -- you can use both on the same board!

Take Your Design Into the Future

The obvious and easy solution to any potential downfalls with SMT is to make sure you're working with a qualified, credible partner. A contractor that specializes in assisting with the design phase will advise you on any potential issues with using SMT vs. through-hole.

As you can see, SMT assembly is a big part of just about every electronics design today. If you're still using through-hole in your PCB design, consider looking into whether or not SMT assembly is the upgrade you need to help your product evolve.

What Does an Advanced Electronics Remanufacturing Company Do?