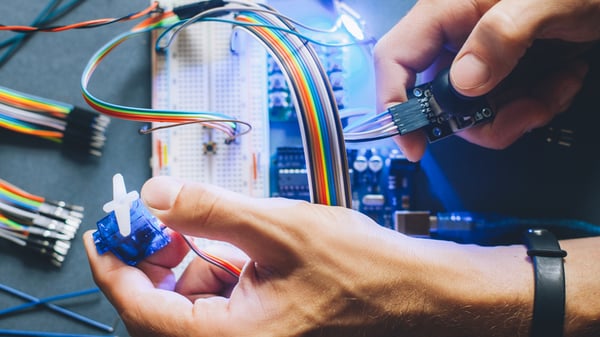 As electronics OEM engineers well know, the printed circuit board (PCB) is crucial to the proper operation of just about every electronics product manufactured today. And complex electronics products for important jobs like mining, medical devices, and aerospace must be 100% failsafe.

Prototyping allows engineers to get a better grasp of what a product will look like on the market and whether it’ll perform the way they requested. Meanwhile, your PCB manufacturer is (hopefully) checking to see if your concept can be manufactured efficiently. Multiple runs can be used to test design variations or to perfect a single function before moving on to the next production stage.

During prototyping, many engineers focus on design experimentation. It’s far more cost-effective to test variables at this point than to produce 10,000 PCBs with a terrible design.

Here are the four basic options for getting a prototype PCB assembly.

A visual model prototype is a brain dump of everything your engineering team wants to see out of your project.

Visual models represent the physical aspects of your soon-to-be-finished project, but they don’t yet function. Instead, they are used to affordably:

The model may be as simple as a drawing, or as complex as an actual, physical prototype. Either way, a visual model helps:

This form of prototyping makes it a little more possible to prove that your PCB design concept will actually work in real life.

As such, a proof of concept may include some working capabilities, but not necessarily all of them. The point is merely to demonstrate that the design will work in terms of one or more of the following:

If done correctly, proof of concept will quickly weed out anything that doesn’t work.

This stage can also be important for validating intellectual property claims in future patent applications.

The final product is coming much closer to reality with this prototype.

At this stage, the prototype is an actual working product that contains all of your anticipated features for the final version. Although some changes might still be made before production, this prototype should still resemble what you* contracted the electronics manufacturer to do.

*A successful working prototype doesn’t 100% guarantee your product will work well on the market. It’s more of a confirmation that the electronics contract manufacturer made what you asked it to.

This stage includes all capabilities and characteristics of the final PCB assembly and everything around it. Success means you can move on to final production with confidence.

A functional PCB prototype tests the electronics design’s capability of performing in the field. It confirms all variables in:

At this stage, the prototype product can also be used to sell your idea to investors or customers.

A Warning About Prototyping

Some engineers and purchasers might think it’s easier and quicker to skip the prototyping process. That might be true if everything goes exactly as you planned it … but does that ever actually happen?

For the closest relationship between design and reality, look for an electronics contract manufacturer that offers PCB prototyping services as part of an all-in-one manufacturing experience. This way your partner will best understand how to quote you, answer your design concerns, and so on.

To increase the odds of a successful prototype even more, provide all necessary documentation and direction up front. Information on that process is available here.

Also, be sure to clearly define any RoHS compliance or other regulatory requirements so there is no confusion down the line. Then be ready to answer questions promptly and review potential design tweaks as your contracted partner brings them up

The better your communication is, the more likely your final product is to succeed, no matter which of these four prototyping options you pick.

Do Your ECM's Obsolescence Management Procedures Look Like This?

4 Times When a Quick-Turn PCB Board House Isn't Enough