STORY OF AN AMERICAN ELECTRONICS MANUFACTURER PT. 4: THE 2000S

From the Playstation 2 to the first-ever International Space Station crew, the beginning of the Millennium saw technological breakthroughs, rolling blackouts, and political turmoil throughout the United States and abroad.

However Matric Limited, a small electronics manufacturer in Pennsylvania saw rapid growth and expansion. From a partnership with Sipco and R2J Technologies to the purchase of Dynamic manufacturing and an ensuing expansion. Matric rode the technological wave through much of the early 2000s.

Through the years 2000 and 2001 the west coast of the United States, (specifically California) saw a massive increase in rolling blackouts due to the Western U.S. energy crisis of 2000(1).

Matric limited, through a partnership with Sipco and R2J Technologies called MLS Electrosystems, decided to enter the wind-energy industry by creating the first electronic servo-controlled pitch system for wind turbines. And in 2001, MLS Electrosystems shipped their first pitch control systems

Through the product line expansion, Matric realized that more manufacturing space was needed to fulfill the increased demand. In 2005, Matric expanded its capabilities by constructing a 20,000 sq ft manufacturing facility. But that wasn’t the last expansion Matric limited would see in the 2000s.

As the 2000s were well underway and Matric was experiencing growth and high demand, Rick Turner and the Matric leadership team entered talks with Dynamic Manufacturing of Pittsburgh to purchase their entire business.

In late 2005 the merger was approved and Dynamic Manufacturing became an affiliate of Matric Limited, increasing the production capacity of both turnkey and board-level assemblies. 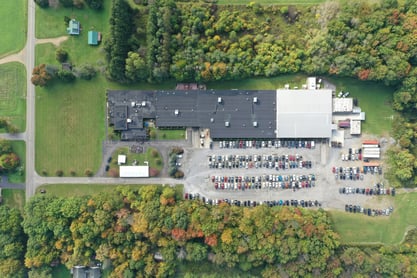 After the acquisition of Dynamic Manufacturing was finalized, Matric was still experiencing steady demand for their electronic components and therefore needed to expand for the third time, this time adding an additional 20,000 sq ft of manufacturing space, allowing for enhanced cable, cabinet, and box build assemblies.

Through this expansionary period, Matric limited also received IPC RoHS certification, ensuring that no toxic or harmful materials are used in the production of their electronic components.

As the 2000s winded down and Matric geared up for a new decade, an on-site testing annex was constructed to improve training and ensure quality throughout the manufacturing process, which is still used today.

Matric Gears Up For the New Decade

As the 2000s came to a close and the 2010s rolled in, Matric was focused on earning industry certifications to become a leading manufacturer of electronic components. In the next part of our Anniversary series blog, learn about how Matric received AS9100 Aerospace and Medical device certifications and installed a new state-of-the-art SMT line.

Until then, check out our compliance and standards guide below to better understand why working with an ISO-certified ECM is a must:

STORY OF AN AMERICAN ELECTRONICS MANUFACTURER PT. 5: THE 2010s TO NOW

Many industrial and manufacturing operations are looking closely at wireless industrial controls to...